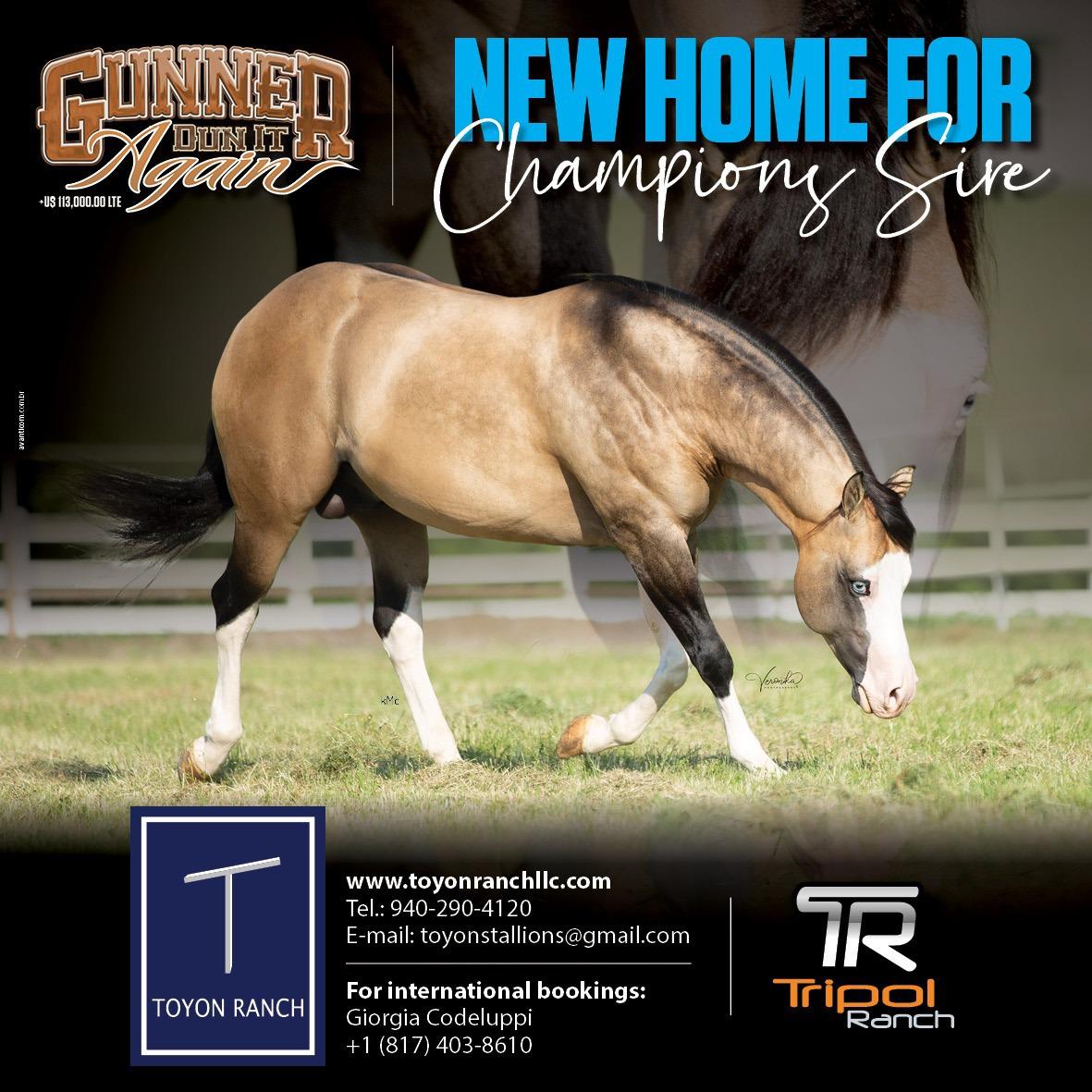 Tripol Ranch Stallion is winner of $113,985 in NRHA Shows and one of the sport’s statistics leaders in Brazil, having recently produced ABQM Open Futurity Champion.

GUNNER DUN IT AGAIN, the buckskin stallion owned by Tripol Ranch LLC, this month of October will be moving from Cardinal Stallion Station to Toyon Ranch

Born in 2011, this son of the legendary COLONELS SMOKIN GUN “GUNNER” out of DUN ITS DEJA VU (LTE $26,285 PE $252,544) by HOLLYWOOD DUN IT, was purchased from McQuay Stables in 2012 by the Tripoloni Family and taken to Brazil, where João Felipe Lacerda trained him and won the title of ANCR Super Stakes Open L4 Champion in 2014.

Back to USA in 2015, “KID” and Lacerda won the title of NRBC LTD and Int. Open Champions and were 8th in the Open. In 2015 and 2016 “KID” was shown by Andrea Fappani and the duo was The Challenge Reining Open Derby Champion and 5th in NRBC Open Derby with the score of 228. In 2017 João Felipe Lacerda took GUNNER DUN IT AGAIN to the NRBC Open L4 finals for the third year in a row and they were  5th in the Open L3.

In 2018, once more João Felipe Lacerda on board of GUNNER DUN IT AGAIN had the most memorable run of his life at the World Equestrian Games, placing 4th as individual. Tied for 3rd place, “KID” and Lacerda marked 227 after an unforgettable run off, scoring the same of the gold medalist. A run off that lit up the crowd and conquered the attention of the world reining industry as one of the most beloved stallions.

After his oustanding campaign as an athlete, “KID” has been proving himself as an excellent Sire in Brazilian show pens, and has already produced very talented sons on North American soil.

In Brazil, its first generation debuted in 2019, placing Gunner Dun It Again as the No. 1 Sire of ANCR Statistics and second in 2020 and 2021, particularly with:

In the US, his only son to compete is CYCLOPS KID, which in 2021 was 3rd in the NRHA Novice Horse Open Derby with Franco Bertolani.

Since 2019, Gunner Dun It Again has been stabled at Cardinal Ranch in Aubrey, Texas, where he began to be promoted as a stallion. The ranch, owned by NRHA Director João Marcos P., is located in the heart of Reining in the United States.

Once called Green Valley, Cardinal Ranch was the birthplace of several internationally renowned stallions such as Lil Ruf Peppy, Wimpys Little Step, Chocolate Chic Olena, among others. Recently, the ranch won a Brazilian flag alongside the American one thanks to João Marcos. Since then, many renovations have been made and the friendship with the breeder Tripoloni, the partnership was born and was very successful.

Under the care of Cardinal Ranch, several Gunner Dun It Again breedings have been sold over the years, thanks to the ranch’s strategic position and the fact that the ranch serves as a showcase for many international customers.

For all that, Tripol Ranch can only be thankful to the entire Cardinal Ranch team for the excellent services provided. Special thanks go to the ranch head trainer, Franco Bertolani, for promoting the stallion in the show pen, as well as Gunner Dun It Again’s first son competing in the United States. Above all, thanks to Dr. João Marcos P., owner of Cardinal Ranch, for promoting the name of Gunner Dun It Again at all major Reining events in the United States, Latin America, Canada and Europe.

Now, with the prospect of breeding an even larger number of proven mares, GUNNER DUN IT AGAIN prepares to move to Toyon Ranch.

Also located in the strategic state of Texas, in the beautiful city of Pilot Point, the ranch is dedicated almost exclusively to the reproduction and sale of products such as breedings, embryos and foals.

To give you an idea, in recent years, Toyon Ranch has grown exponentially, acquiring world-famous mares, including Gunner Dun It Again dam, Dun Its Deja Vu, as well as the dams of The Run For A Million Champions, No Smoking Required and Gunna Stop.

More information about Toyon Ranch can be found on the website: https://www.toyonranchllc.com/, or calling (+1) 940-290-4120 or by e-mail: toyonstallions@gmail.com.

It is worth mentioning that Gunner Dun It Again semen is available in Brazil, United States, Canada, Mexico, Europe and Australia.